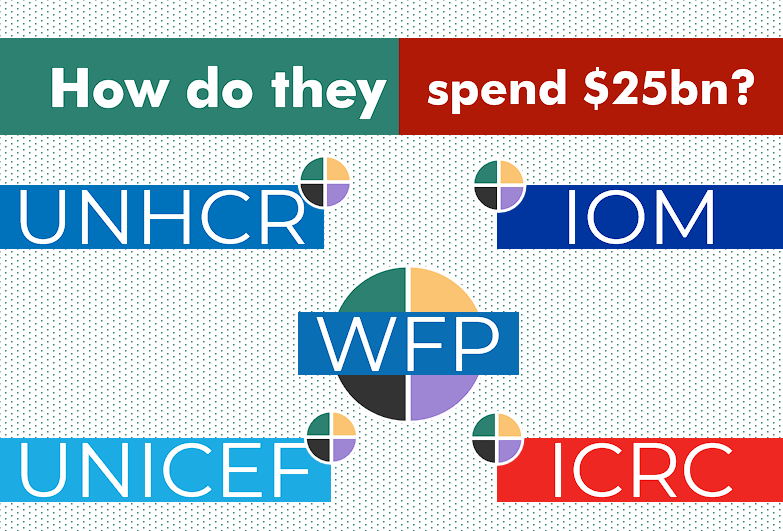 How do the big agencies spend their money?8 min read

But how do they actually spend their money? And how has it changed over time? When we’re dealing with such a huge amount of money every year as a sector, these questions matter. These are the questions we’ll explore in this story by looking at each of these agencies in turn. We’ve scoured 53 annual reports and have picked out some highlights that we think you’ll find interesting.

One of the difficult things to do is to make cross-agency comparisons. In many cases these organisations use different cost categories in their accounts so that makes things tricky. But we can still pick out a few things.

Firstly, the trend towards cash as an operating modality is apparent. We can see this in nearly all agencies to varying degrees, and particularly at WFP. This also raises questions regarding a possible tension between cash and localisation – is more money going to cash, rather than local NGOs? More on this below.

Secondly, precarious working seems to be on the up. WFP and UNHCR, in particular, are spending more on more temporary forms of working. What does this mean for the people that make the sector work?

WFP’s turn to cash as a response modality is not a surprise to anyone. What is interesting, however, is the speed at which the shift to cash has happened. Back in 2011, WFP spent only 3% of their expenditure on cash and voucher assistance – that equals $121m. A decade later and cash represented 26% ($2.3bn) of total expenditure, not far off the 32% that WFP spends on food.

The shift towards cash is stark and represents a broader trend in the sector.

WFP now spends 31% of their staff costs on the precarious work contracts of temporary staff and consultants, up from only 13% a decade ago. Spend on consultants increased from $39m to $207m across the period, as did spend on temporary staff from $46m to $180m.

This shift away to less secure forms of employment is also apparent in other agencies. For example, UNHCR appears to have increased spend on consultants across the same period.

UNICEF have changed slightly, but not by much

Could there be a substitution effect between funding implementing partners, and direct cash assistance?

However, the overall cost base has remained relatively stable. Transfer of programme supplies increased slightly since 2012 (up 0.8% points), whilst employee benefits decreased 4.2% points.

Cash assistance (to partners and beneficiaries) accounted for 35% of their expenditure in 2021, followed by 24% on employees, 18% on programme supplies, and 16% on ‘other expenses’.

UNHCR have shifted slightly away from implementing partners

The slight movements in the UNICEF cost base are also reflected in the UNHCR accounts – except just a bit more exaggerated.

UNHCR used to spend 38% on implementing partners in 2012, and now spends 29%. Staff costs are only down by a couple of percentage points. And there has been a similar growth in cash to beneficiaries.

Cash used to represent only 4% of their expenditure ($103m), but this has since grown to 12% ($573m). This again poses the question of a potential substitution effect between direct cash assistance and money to implementing partners.

Could the growth in cash assistance put more money into the coffers of international actors who now spend less on implementing partners, and could there be a tension between cash and localisation? (We’ll explore this in a future story).

The biggest driver of this is the increase of “affiliated workforce and individual contractors” which now accounts for 3.5%. At the same time, salaries and employee benefits accounts for 2.7% less. This reflects a similar trend in the WFP accounts towards precarious working, although to a lesser extent.

A decade ago there were two big cost drivers at IOM: staff costs and ‘contractual services’. This still remains the case, but staff costs have expanded. Staff salaries and benefits now account for 32% of expenditure, up from 23% in 2011. This change is particularly evident since 2017 – prior to this salaries accounted for $300-$400m roughly, but this has since expanded to $812m in 2021.

And the good news is that this is fairly evenly split. National civil society organisations (52%) and national governments (2%) account for over half of these implementing partner transfers of money, compared to 48% for UN/international organisations.

ICRC is different than the other organisations we’ve looked at. On the surface, it is a bit smaller (only $2.1bn in 2021), and not a UN agency. But the differences are more substantial than this, particularly in terms of its cost base.

This reflects the different operating models of the different agencies. WFP is driven by modalities where the supplies to overhead ratio is higher than other agencies (i.e. cash and food). Agencies such as UNHCR and UNICEF operate with more partnerships (around 29% of both agencies expenditure in 2021), thus outsourcing and pushing off the books some of the staff costs.

ICRC on the other hand internalises these costs. ICRC’s primary partners are internal: national societies. Thus, it probably isn’t fair to look at the staff costs graph as a proxy for efficiency. Instead, it should be read as a proxy for organisational operating models.

Given the supremacy of staff costs, other shifts in the cost base look relatively small. Expenditure on goods and materials now accounts for less of the overall pie (down from 20.9% to 16.5%), whilst financial assistance is up from 1.1% to 9.4% – reflecting the broader trend across the sector.

We would love to read into these numbers and see ‘efficiency’ and ‘inefficiency’. It would help us to test the hypothesis that the cost of humanitarianism is getting higher due to the increasing cost of servicing multi-billion dollar bureaucracies.

The truth is that it’s hard to say much about ‘efficiency’ or the cost burden of these agencies. This is due to the lack of detailed cost categories from some agencies, change in cost categories year-to-year, and lack of comparability across agencies.

We’ll continue to think about ways to test this hypothesis – if you have any ideas please get in touch. 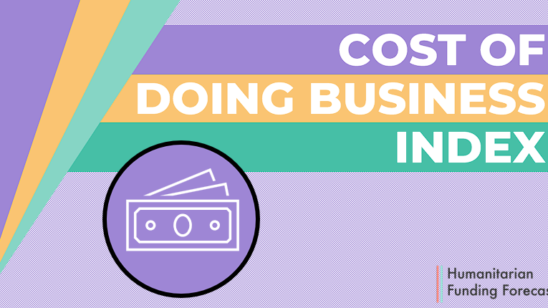 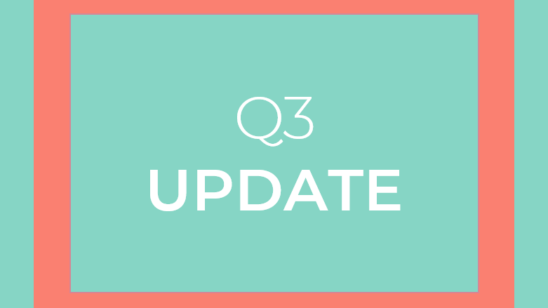